As Australia commemorated Anzac Day, there were battles aplenty on the water in an action-packed finale to Sail Port Stephens 2021, which saw some surprise victors in a number of divisions.

The two-year break due to last year’s COVID-enforced cancellation made the contests more willing than ever, yet when the spray settled the winners were grinners and the vanquished vowed to return next year to do it all again.

Ichi Ban owner Matt Allen was delighted to be back at a regatta where he has enjoyed considerable success, taking home the prestigious NSW title for IRC Division 1 along with ORC honours. Two wins today, when it mattered, put an emphatic exclamation mark on the result.

“It was another good day’s racing out there, and everything worked out well. It was a good test of boat speed and tactics,” he said.

“We wanted to hit our straps this weekend. We have one more regatta in Newcastle next weekend and that’s it until the Gold Coast Race, so it was nice to get the mojo back and get the boat into top gear.

“I’ve also been busy off the water with what’s going on in world sailing. It made it even nicer to get out there and switch the brain to sailing mode. Everything else evaporates.”

As expected, Dale Sharp’s Sofarr claimed its second consecutive NSW title after finishing the six-race series on 15 points – 11 ahead of runner-up Stormaway, with 3rd-placed Get it On a further point adrift.

The smallest boat in its division, the Farr 31 was muscled out of the first start but recovered to finish 3rd and effectively wrap up the series. It then posted a 7th in the final race when the pressure was off. The Italia 11.98 Cicero took home the ORC title for the division.

Race officer Denis Thompson: “It was good to get some breeze again today and we had two excellent races. Really, it has been pretty smooth sailing this week. The protest committee was a little busier than normal, but that’s probably to be expected when you have 130 yachts in close quarters.

“We have a lot of happy customers out there, and that’s the main thing.”

The Sydney 40 posted a 10th, it’s worst result of the week, in Race 5 but rebounded with a 2nd in the last race.

“We’re very happy to bounce back after that. The boys hung in there and sailed really well,” Dodds added.

“We’ve had some podium finishes before at Airlie Beach, but I think this is the best result for the boat. Most of the owners have been on board this week but we also like to bring a few newbies in, so they get the experience as well.”

With PHS handicaps being adjusted after each race, the Beneteau 34.7 Speedwell sped home with a wet sail today to snare Performance Racing Division 2 from Agent 88 and Bullwinkle. Overnight leader Fareast 28R dropped to 5th overall.

There were more movers and shakers in Performance Cruising, Robert Hale’s J122 Jackpot taking a late win in Division 1, as did Port Stephens local Una Vita in Division 2. Joji made it a two-up for J Boats by maintaining its overnight lead in Division 3.

Top Gear’s Stig was a man of few words, and Lake Macquarie sailor Malcolm Dean also let his Shaw 650 of the same name do the talking in the hard-fought ASBA State Championships.

“We didn’t need to sail the last race, which was a nice position to be in,” Dean said. “The regatta was awesome. The race committee on our course did a brilliant job in really challenging conditions. Everything was perfect – we kept checking bias on the start line and there wasn’t any.

“I’m going to buy them all a beer this afternoon.”

The Stig has won the past two national titles, the past two Queensland titles and now the NSW – a trifecta that Dean believes has never previously been achieved in the class.

“It was the last piece of the puzzle and I don’t think anyone has done it before. We have a great boat and also a great crew.”

Cousins Andrew and Israel Smith, who happen to live in the same street as Dean, were pulling the strings on The Stig.

Re-Heat finished second overall and took a race win today. “We’re always wrestling with them, even in the pub,” Dean said. “There’s great banter and we love sailing against the best – that’s what we enjoy.” 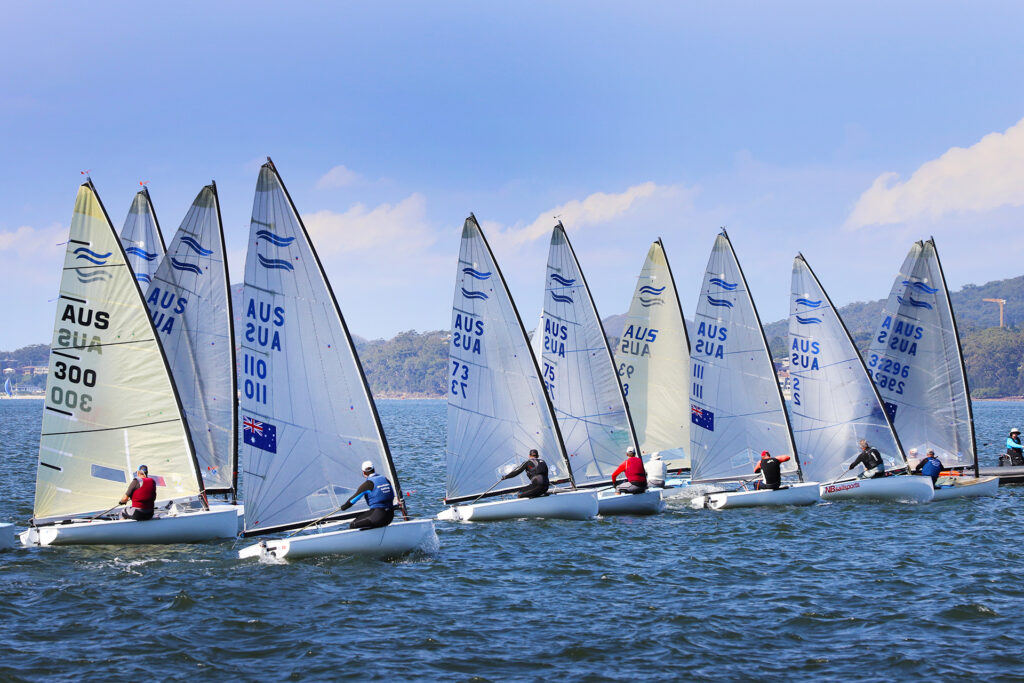 Where only one race was sailed yesterday due to a non-existent breeze, the Finn class managed three excellent windward-leewards today. Association President Phil Chadwick was rapt with the regatta and, like Dean, full of praise for the race committee from Bay Sailing Centre.

“We’ll be back, and we’ll bring more with us,” Chadwick said. “We had a beautiful apartment right on the water and rigged up on the front lawn. All nine Queensland Finns launched together, and we had a ball.

“Last night, 24 of us went to dinner and we have 14 tonight. Sailing’s only half of it – for us, socialising is the other half. We loved the venue and the holiday atmosphere.”

Rob McMillan dominated the results aboard NB Sailsports, winning two of the four races against a nationals-quality fleet.

Sabots and Lasers also joined the regatta, which is now set to become a permanent fixture on the Sail Port Stephens calendar. 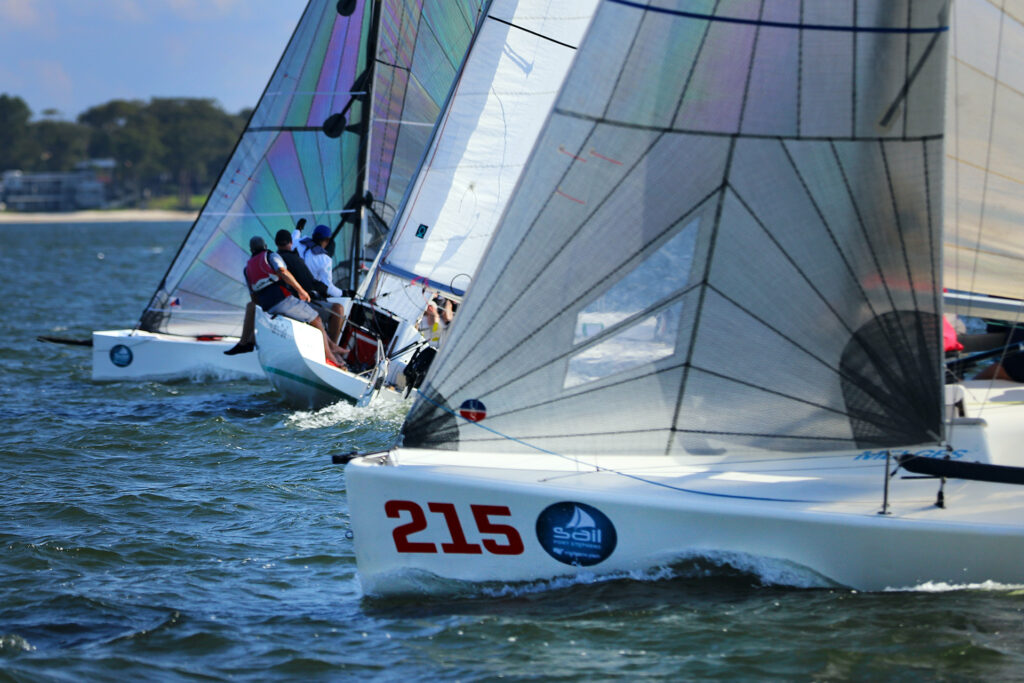