Mark Hillis’s trailable Fareast 28 Chicken Lips hails from the NSW Riverina region where a lack of wide deep-water lakes means the crew has to travel from Wagga Wagga for their racing fix.

“If we tipped that boat over in Wagga’s Lake Albert the mast would go through someone’s front window,” Hillis grins. “The lake is so small and only two metres deep. Our nearest ‘lake’ is the Pacific Ocean so we travel to where the regattas are.

“So far we’ve done the Marlay Point race and the Festival of Sails at Geelong, and we wanted to come to Port Stephens, we love it here.

“Two more Fareasts will be joining us on Friday for the Performance Racing series so we’ll have others to really match up against,” he added at the conclusion of the first stage of the 10th anniversary Sail Port Stephens on Wednesday April 5.

“We don’t take any of this too seriously,” Hillis remarked on their combined points in the Commodore’s Cup, not helped by being over at the start in Wednesday’s final race and the five minute penalty they accepted over restarting against the fast-running tide.

The semi-retired caravan dealer is realistic that “based on our results, professional skippering isn’t really an option for me.”

Dealer Gerrit Veenemans has registered his Queensland Fareast 28 and Matthew Brown’s Sea Dragon, also from the Royal Queensland Yacht Squadron, will be on the Performance Racing division two start line for the next three days.

Chicken Lips is the nickname of Mark’s wife Christine, something “she’s not going to comment on” Hillis smiles. There are cartoon chicken graphics on the boat and the words ‘Go the Chook’ on the boat and crew shirts, and many of Mark’s comments are on-theme.

“Our pace upwind is about the same as everybody else but these boats are designed for windward return racing which I don’t really like. I love sightseeing. When the courses are designed around spinnaker runs feathers start to fly on the Chook.”

Hillis always wanted a new boat and when this Fareast 28 came on the market it was the right-priced opportunity he’d been waiting for. He bought it nine months ago, waited out the winter then started turning up at regattas to represent Wagga Wagga Sailing Club.

“It’s really good value for money, easily transportable and it looks good too!” the owner reckons.

Chicken Lips’ striking grey and orange colour scheme makes it easy to spot among a sea of white Commodore’s Cup yachts. So impressed with the colour scheme was the Fareast dealer, he went for the same look for his personal boat.

So far the highlight of Sail Port Stephens for Christine and Mark was seeing dolphins in Nelson Bay on Tuesday during the Commodore’s Cup passage race. “It was a real thrill for us country people to see three or four dolphins. Christine was so excited. I’ll bring some sheep up here for you guys next year.” 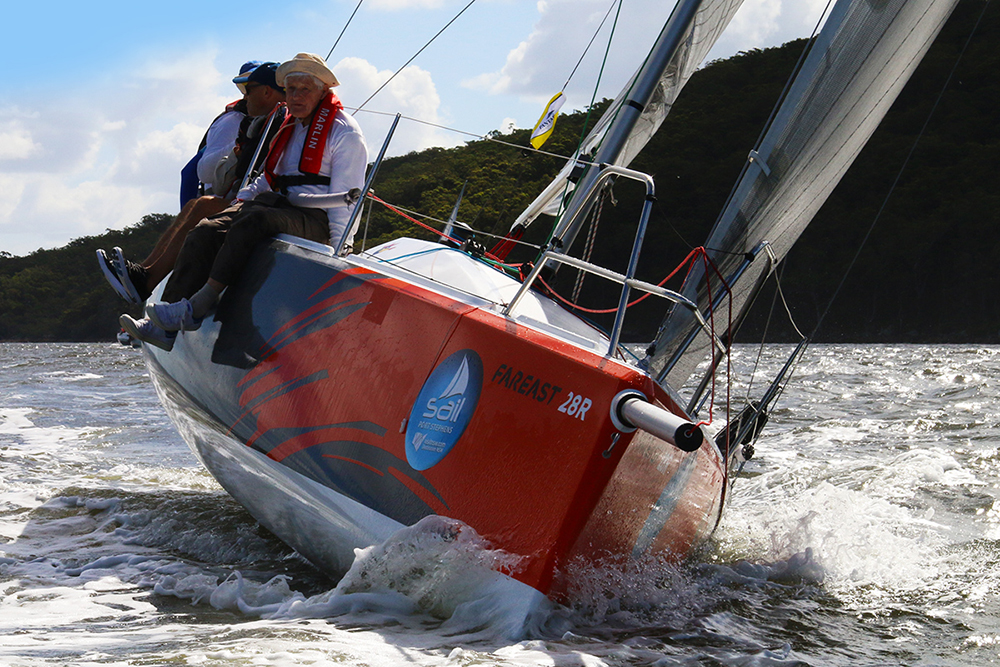 Chicken Lips in the Commodores Cup