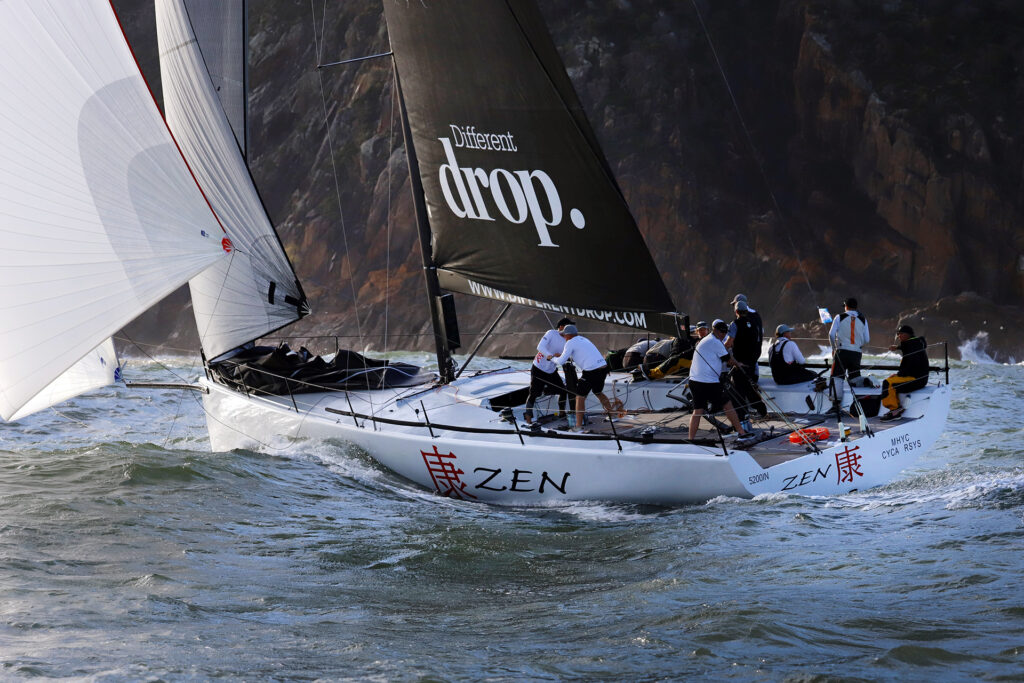 Course change as good as a holiday

The best laid schemes of mice, men and race committees often go awry, especially in the fluid environment of yacht racing, and Day 6 of Sail Port Stephens 2022 was one of those days. Plans were announced at the morning briefing to send the entire fleet offshore, a popular tradition of Sailebration Saturday, yet the sea conditions at the heads simply didn’t cooperate.

Instead, Principal Race Officer Denis Thompson swiftly switched to Plans B, C, and D which ultimately meant keeping two IRC/ORC divisions and the four-division Performance Cruising fleet inside Port Stephens on a super-sized windward-leeward passage race track. Only the eight TP52s, comprising IRC/ORC Division 1, got to taste the ocean brine with a passage race to Broughton Island.

That was late in the piece, around 2pm, after the wind-versus-tide washing machine had subsided somewhat.

It was an excellent call that meant everyone got to enjoy a sail, highlighting the fact that Thompson has a veritable degustation menu of courses at his disposal for such times. It was also the perfect way to ‘sailebrate’ a day where the local community flocks to the waterfront to watch the biggest annual event in Port Stephens.

Everywhere you looked, upwind and down, sails filled the skyline.

“The conditions at the entrance this morning were horrendous,” Thompson explained. “There was a swell of around 3 metres with very short troughs, so we wouldn’t have been able to anchor the start boat or the marks. It would’ve been quite dangerous for the smaller boats as well.

“The inside race was safe, and nice for sailing. We also waited for the seas to moderate for the TP52s and they had a great race all the way to Broughton Island and back.”

While several yachts found the sandbar – Victoire and Khaleesi from IRC/ORC Divisions 2 among them – and it was certainly busy on the water, there were no major hiccups.

IRC Division 2 results went to the Mat 1245 Bushranger, helmed by Gerry Hutton and with Michael Fountain the all-important tactician. They were anything but disappointed.

“We actually didn’t know where we’d finished [on handicap] but the thing is, it didn’t matter. We just had a great day on the water in such a beautiful place,” Fountain said. “It was challenging – we had to work our way through 100 different boats on the course, and factor in tide and sandbanks – but it really just tested our skill.

“You have to find the right lanes, which aren’t always obvious, and you have to anticipate what the other yachts might do.”

Second was Soozal, with line-honours winner Nine Dragons third, in what is becoming a three-horse race for the NSW Yachting Championship trophy. “You can throw a blanket over us most of the time. There’s seconds in it after racing for several hours,” Fountain added.

Weather permitting, there are three more races scheduled for tomorrow, and only four points separating the three. On ORC overall, Bushranger leads the way from Soozal and Nine Dragons.

In the TP52s, Zen maintained its winning form today, taking both line and handicap honours, eclipsing Matador and Gweilo on IRC to lead Celestial by three points and Gweilo by five. ORC sees Matador leading, while Quest has a slight edge in the class-based Gold Cup scoring.

IRC Division 3 has a new leader in Stormaway, Col Gunn and Jack Stening’s Sydney 36. Other results were subject to a protest last night involving SoFarr and Get It On.

Performance Cruising results were as follows:

The Reichel Pugh 52 Virago posted a second victory after leading Little Nicho home by around 18 minutes. The local Beneteau 50 51st Project and Austmark filled the minor placings today. With one race left, Virago is six points clear of Austmark and KD4

Provisional results had victory going to Dennis Hume and crew on the Melges 24 Wubaray from the Northshore 370 Rumba and another Melges, Knot Ready. Leading overall is the Bavaria 41 Elusive, with Animal Farm and Young at Heart nipping at its keel.

The Jeanneau 39i Slac-n-Off did anything but, winning the daily prize from Geoff Campbell’s NS38 Cipriani and the elegant Vittoria. The latter leads overall from Inception and Lady A.

If anyone’s having a fantastic time at Sail Port Stephens it’s the Tasar class, which has had two days of testing winds. With seven races sailed and a drop coming into play after six, Hugh and Anna Tait on Serendipity AUS2925 are lying in first place, with Chris Dance and Peter Hackett second on Magic AUS2980, and 3rd Rick Longbottom and Daryl Bentley, on Timely Element AUS790.

Off the Beach Regatta

In other classes being sailed at the Bay Sailing Centre’s Off-the-Beach series the flying Finns managed four races in physically demanding conditions. Last night’s post-race barbecue was reportedly demolished by the sailors.

Rockal Evans proved unbeatable, although Marcus Whitley and Phil Chadwick are both showing consistency at the pointy end of the fleet.

A large fleet of Windsurfers and raceboards also completed a number of short-course races. Results had not been listed at the time of writing.

Finally, the trophy for the crew who has performed the best ‘off’ the water, in the spirit of Sail Port Stephens, was awarded to the Sydney 40 Mako by last year’s recipient, Sea Hawk.

Tomorrow is the final day for the 2022 Sail Port Stephens regatta, which is generously supported by the NSW Government through Destination NSW, and sponsors including Pantaenius Yacht Insurance, Bannisters Port Stephens, Sea Breeze Hotel, d’Albora Marinas and more. 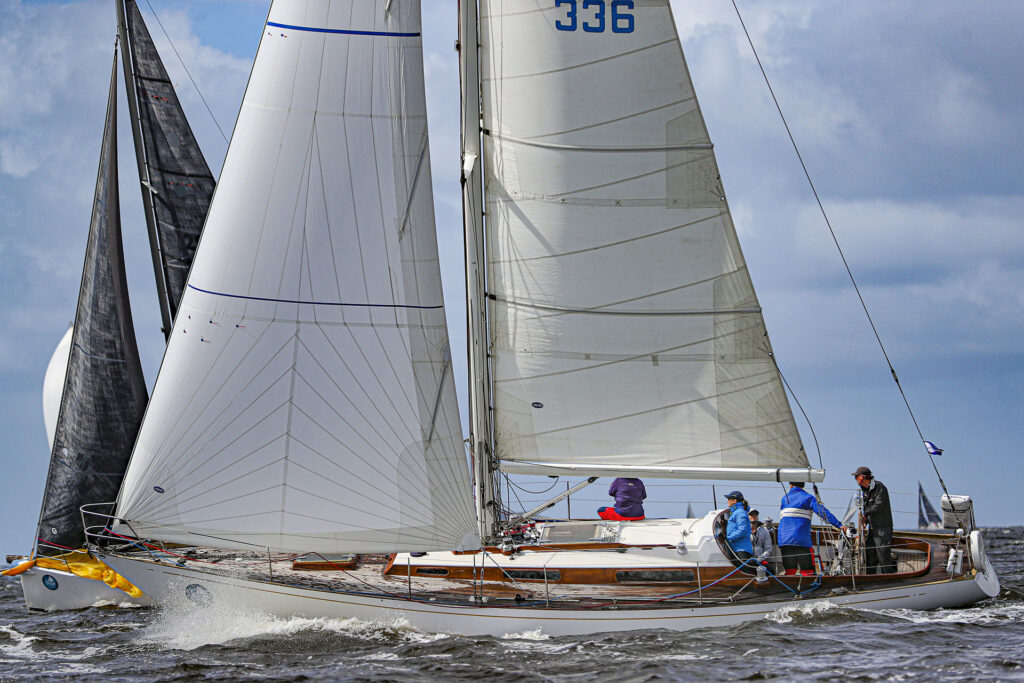 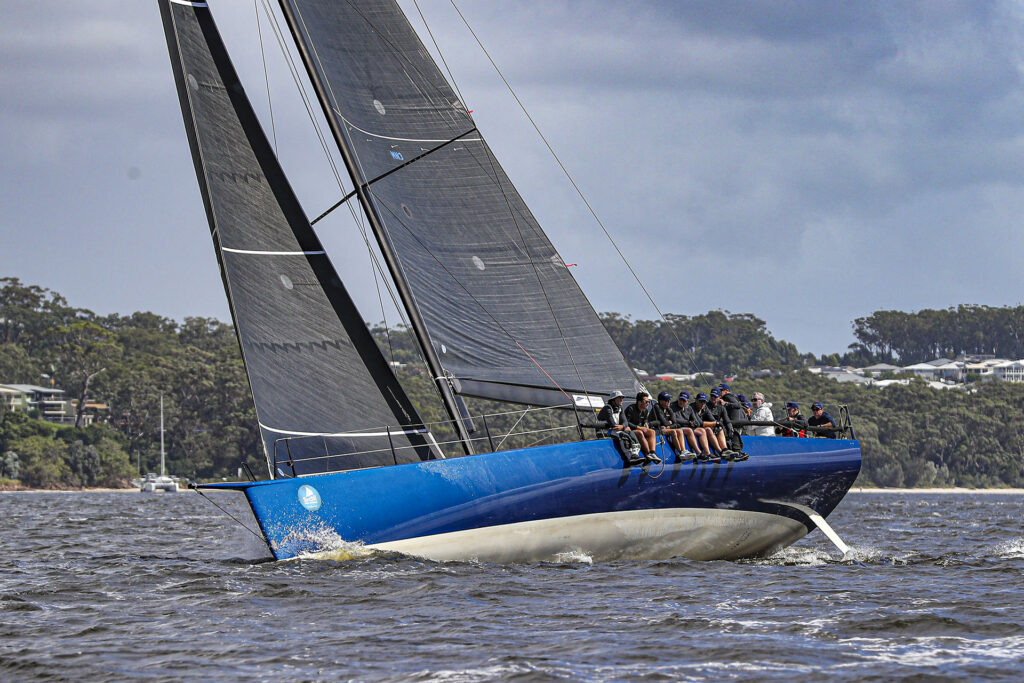 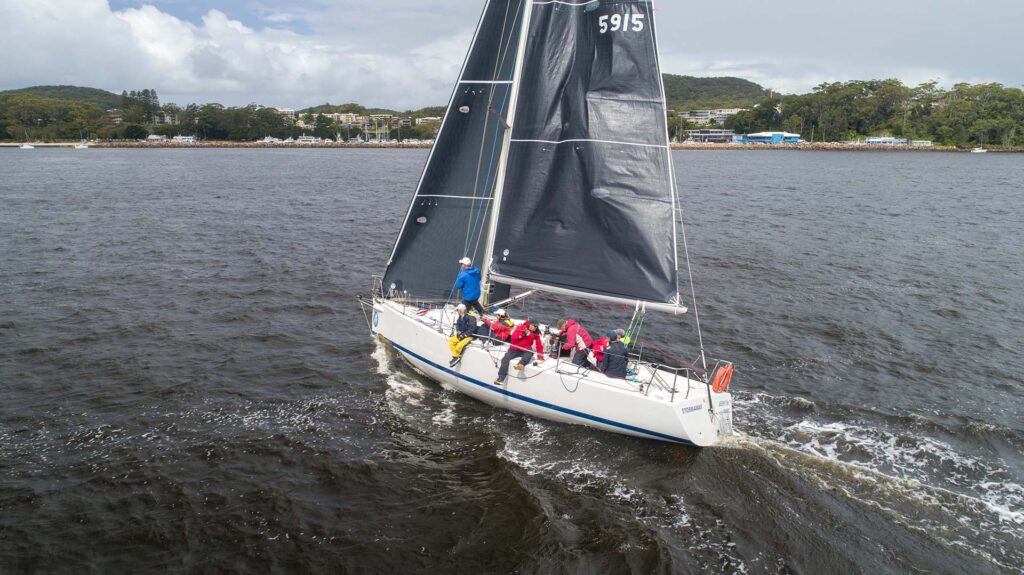