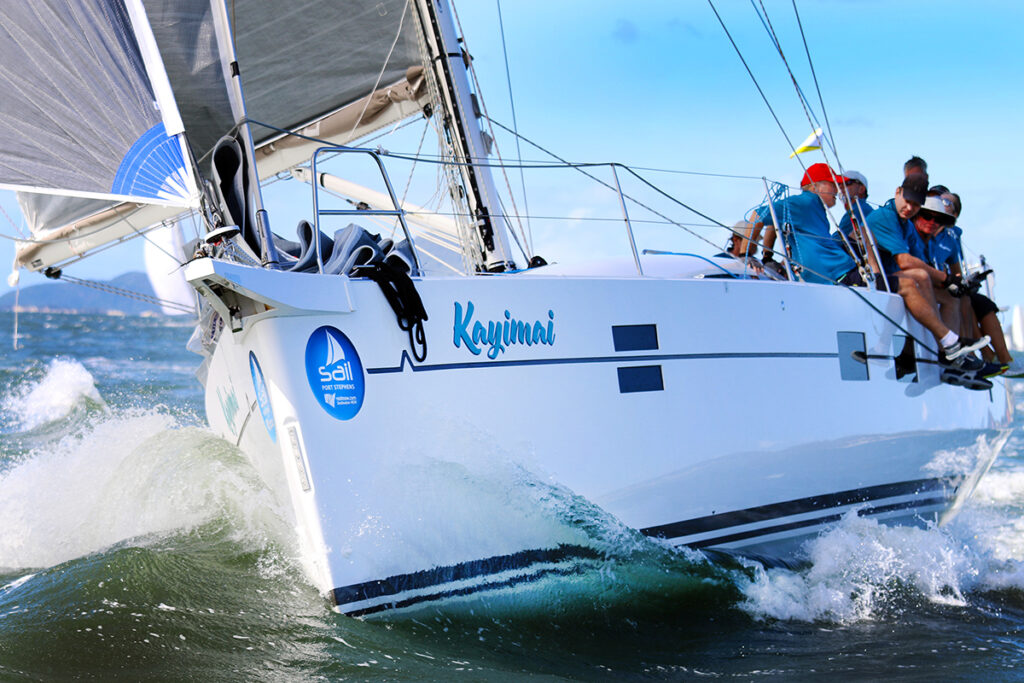 Full sail ahead for bumper fleet

A year after its COVID-enforced cancellation, Sail Port Stephens regatta has rebounded in record style, filling marina berths, moorings and motels while boasting the largest number of individual entries across the various yacht, sports boat, dinghy and windsurfer categories.

Starting midday Monday, 108 yachts across four divisions will contest the 2021 Bannisters Port Stephens Commodores Cup, sailing one of 14 scenic inshore and offshore courses that Principal Race Officer Denis Thompson has at his fingertips.

Among Div.1 line-honours contenders will be the Marten 49 Indigo2, DK46 Khaleesi, Shaw 11 Little Nico and local yacht 51st Project, a Beneteau First 50. The Azuree 46 Kayimai is another regatta regular with a remarkable turn of speed under kite, always well sailed by her Middle Harbour crew.

Port Stephens is paradise found for production cruiser-racers like this, and there’s a wide array of entries from the stables of Beneteau, Bavaria, Elan, Hanse and Jeanneau. Newest of all is Alistair and Alison Rowe’s Elan E4 Marri Nuwi, launched earlier this month for its maiden race series – the yacht’s name, incidentally, means ‘big canoe’ in the Indigenous dialect of southern Sydney.

Mindful of being a COVID-Safe event, social aspects of SPS21 will be arranged and monitored prudently. The Wild Oats welcome party is once again scheduled for Monday night and a ‘vintage nautical’ ball for the Commodores Cup will be staged at Bannisters’ Cheeky Dog. Tickets have sold out.

“This time last year we were stuck at home watching Facebook videos of past regattas, reliving the good times, so it’s fantastic to see so many boats and crews able to come back to Port Stephens,” event director Jennie Hughes says.

“Obviously there’s a real pent-up demand to enjoy a great week of racing and socialising in this beautiful part of the world. In fact, the Bay is absolutely at capacity and, unfortunately, a number of yachts just couldn’t get a berth or mooring.

“For those who could, we’re aiming to have 200% as much fun, on and off the water, to make up for lost time, albeit there are measures in place to alleviate crowding and minimise the impact on the local community.”

Thursday’s lay day allows crews to experience the many tourism attractions, along with a Layday Playday charity lunch organised by the Making Waves Foundation. Racing then swings into top gear from Friday to Sunday, under the umbrella of the Port Stephens Trophy series. 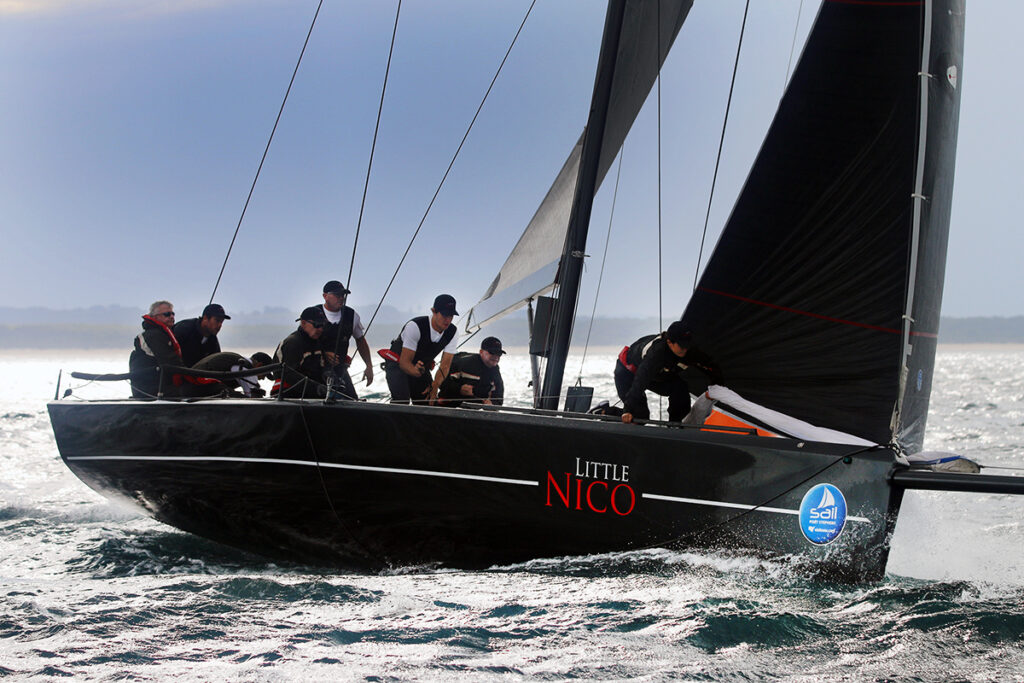 Checkmate of Hollywood, Ray Roberts’ 1978-vintage Peterson 50 IOR, will lend an air of timber tradition to proceedings, with its glistening varnished topsides conspicuous alongside a trio of carbon fibre TP52s – Celestial, Ichi Ban and Smuggler.

Penned by the VPLP office in collaboration with Beneteau, the 36-foot (10.85m) light-displacement yacht brings a slice of America’s Cup technology to Port Stephens, albeit its foils are designed to increase righting moment rather than carrying the hull aloft.

Among five Fareast 28s in this division is Chicken Lips from NSW’s Riverina region, as owner Mark Hillis and crew love the wide-open waters of Port Stephens: “If we tipped the boat over in Wagga’s Lake Albert the mast would go through someone’s front window,” Hillis jokes.

Renowned boatbuilder John McConaghy will also feature in his 47-footer Second Time Around, a yacht he designed, built and launched in 1995, sporting hydraulic lifting keel, carbon rig, twin rudders and a luxury fit-out.

The Flagstaff Marine Performance Cruising divisions has 65 starters, just shy of the 2019 fleet but once again featuring a wealth of cruiser-racers. 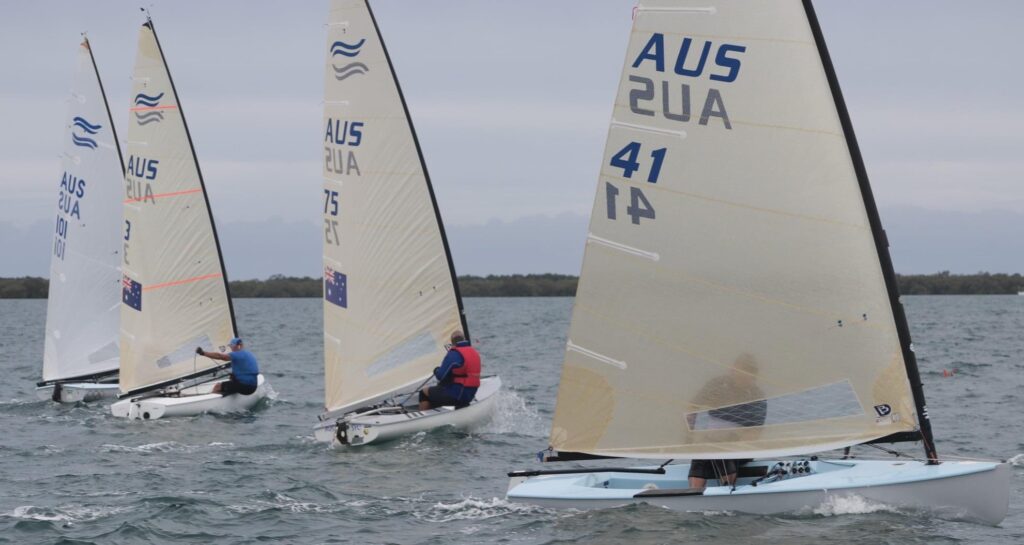 To borrow a Jimmy Buffett lyric, there’ll be Finns to the left and Finns to the right at the inaugural Sail Port Stephens Off-the-Beach regatta running April 24-25, as the current Olympic single-hander is enjoying a world-wide renaissance since adopting a carbon rig, mylar sails and lighter hull.

Around 20 Finns are coming from Queensland and Sydney, a nationals-style presence and the biggest class gathering in 12 months, according to Association President Phil Chadwick.

“If a Laser or OK dinghy is too small, the Finn feels just like home to larger sailors of 90 to 120 kilograms,” Chadwick explains. “They’re like a classic vintage car, really comfortable to sail. The lighter hull and rig help them plane earlier and longer, and there’s no weight jackets … so they’re easier on the body.”

Another evergreen class, the Windsurfer, is also attracting a large number of sailors for the NSW Slalom titles and Anzac Day marathon. It’s open to all Windsurfer Class boards including Windsurfer LT, Windsurfer One Design and original Windsurfers.

With Bay Sailing Centre, Salamander Bay, as the host club, Port Stephens locals can demo-sail the revitalised LT boards prior to racing on both mornings.

Stay up-to-date with Sail Port Stephens news and results via this site or facebook/sailportstephens/.