Port Stephens wore its Sunday-best weather today, with summer-like temperatures and gentle autumn breezes, however it made for some leisurely progress in the annual Sail Port Stephens feeder race from Newcastle.

The Newcastle Cruising Yacht Club sent its largest ever fleet of 48 yachts across Stockton Bight in 5-10 knots after a spectacular, tightly packed start on Newcastle Harbour.

They’re now set to compete in Sail Port Stephens’ opening event, the Commodores Cup, over the next three days, which also boasts a record fleet of 78 yachts split into three divisions.

Friday to Sunday sees a full card of racing, including national titles for the Australian Sports Boat Association, State Championships for IRC and Super 12s, plus Performance Racing and Cruising Divisions.

“Now in our 11th year, we have our largest ever fleet in the iconic Pantaenius Commodores Cup and the prospect of some postcard-perfect weather over coming days. I’m sure our visiting crews will see why Port Stephens is favourably compared with the world’s premier yachting regions,” Regatta Director Paul O’Rourke said.

“Broughtons at the Bay function centre at d’Albora Marina Nelson Bay becomes the yacht club ‘hub’ for registrations, briefings and post-race celebrations, but really you can feel the nautical fever right throughout Nelson Bay.

“All the marinas are full, the social calendar is packed, and it looks like being our best regatta – not just the biggest”

Race Officer Denis Thompson says light winds and moderate tides should get the fleet off to an easy start. “The weather looks like being fantastic if you happen to like fishing, waterskiing and dolphin-watching,” he joked.

“It’s a great fleet as well, amazing when you think we started with only 20 or so boats. I’ve had to do some course adjustments to avoid having too many boats coming back on each other.”

It’s a time for the many different production yachts to shine in the sun, alongside an eclectic smattering of older or modified racing designs. The mixed-fleet PHS handicapping is always a challenge for organisers, but the Sail Port Stephens committee is using a baseline guide developed by UK’s Royal Yachting Association.

“It has hundreds of designs listed so we can get 90% of the boats covered as a starting point. With others we look at past results or club performance,” Thompson added.

“With such a wide range of boat we won’t have a spinnaker or non-spinnaker division as such, but we’re asking skippers to advise us if they’re not planning to use a kite and we’ll adjust their handicap accordingly.”

The surprise packet in today’s Newcastle-Port Stephens race was Anger Management, not a renowned light airs flyer. Adding to its second placing on line honours, it claimed first in both IRC and ORCi, and second in PHS.

“The boat normally likes more breeze but we managed to carry our A1 spinnaker shyer than normal and a lot further than the other boats around us,” Richard Arnall said. “Flowing on from our win in the Coffs Harbour race, the boat’s still going really well.”

Anger has competed in every Sail Port Stephens series and feeder race over the past 11 years. “Every time we’ve been beaten it’s by a boat on the beach … and today we were the boat on the beach,” Arnall added.

Ignition grabbed second in ORCi while Newcastle yacht Schouten Passage, a Beneteau 40 skippered by Rob Howard, was runner-up in IRC.

Flying the flag for production yachts, Rob Aldis’s Azuree 46 Kayimai grabbed a pair of thirds in ORCi and IRC. The twin-ruddered Rob Humphreys design has entered the Performance Cruising category at Sail Port Stephens but most certainly has a blue-blooded performance.

PHS honours went to 2XCESS, a Farr 30 from Southern Lake Macquarie, edging out the Sydney 38 Challenge and Anger Management. 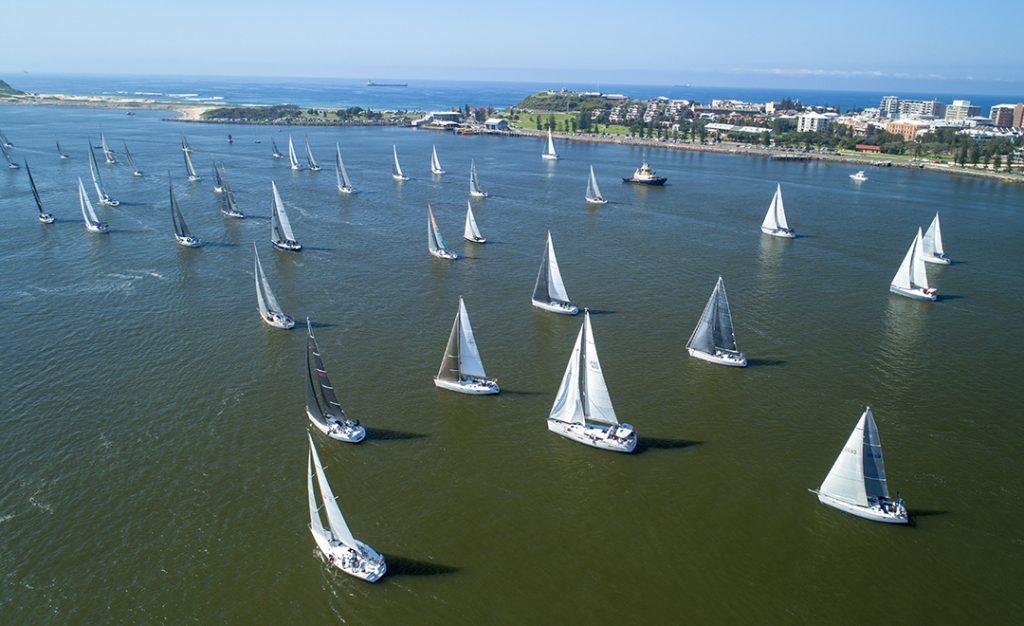