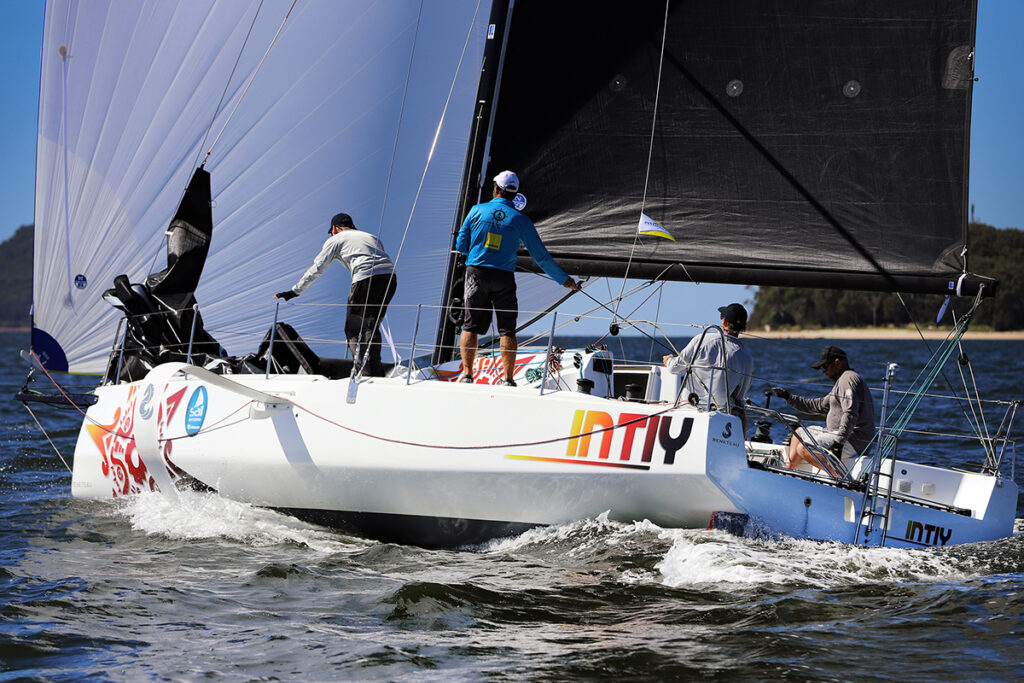 The world would’ve watched in utter amazement today as 130 yachts lined up for the opening spell of a massive weekend of racing at Sail Port Stephens 2021.

Spinnakers lined the entire bay, cheek and jowl, in a spectacle that turned the clock back to pre-COVID days, further mirrored by a simple post-race sausage sizzle from title sponsors Pantaenius Yacht and Sail Insurance that was appreciated by a horde of hungry sailors.

Among the events underway are the NSW IRC Championships, Australian Sports Boat Association NSW Titles, and Flagstaff Marine Performance Cruising and Racing divisions. Tomorrow, it steps up another gear with an off-the-beach satellite regatta that has attracted a strong fleet of Finns, Sabots and Windsurfers.

Today, the heavyweights of Division 1 IRC revelled in a challenging westerly breeze, with the TP52 Ichi Ban leading the way after posting three consistent results in shifty conditions – a first in race 1 followed by a pair of seconds. It backed this up with three wins on ORCcI.

Fellow TP52 Celestial lies in second place overall, buoyed by a victory in race 2. David Griffith’s Judel-Vrolijk 62 Whisper tore a spinnaker during a drop in race 1 but ended the day third overall, posting a 4, 3 and 5.

Matt Allen, owner-skipper of Ichi Ban, enjoyed being back on one of his all-time favourite race courses off Port Stephens: “I remember Denis [Thompson] and I discovering the track back in my Farr 40 days. It has always offered something special, and today, even if you were on the wrong side of a shift, you could still get out.

“We saw quite a few different wind strengths during the day, but it was still good racing. We had our backs against the wall in race two particularly, but our boat doesn’t have too many vices – the crew do, but not the boat.”

Fresh from a Commodores Cup win, the Farr 31 Sofarr, owned by Lake Macquarie’s Dale Sharp, continued its giant-slaying performance in IRC Division 3 with scores of 2, 1, 1 – it’s already eight points ahead of the Sydney 36 Stormaway. Cicero is the overnight leader in ORCcI.

“The wind conditions were just perfect for our little red girl,” Sharp said. “We sailed the beats nicely and rounded the top mark first or second in most races. Our downwind course selection could’ve been better but, overall, we’ve got to be happy.”

Denis Thompson, PRO for Sail Port Stephens, was also impressed with the course today – and the standard of sailing he witnessed from the start boat.

“The breeze was fairly consistent for most of the starts, although it wavered a bit in the gusts,” he explained. “On the last leg of race two it became a split breeze and they reached home, and there was nothing I could do about that.

“We shifted course for race 3 and the breeze hung in there around 8-10 knots – it pretty well went according to the last forecast I received.”

Honours in Performance Racing, which shared the IRC course, went to Mako, a Sydney 40 with multiple owners and even more regattas under its keel. Today it was helmed by Tim Dodds and won two of the three offshore windward-leewards to lead Shine On and Risk.

Thompson: “The Performance Racing guys had really good racing – I was impressed by the way they started and got around the course. There’s a real mixture of boats – some with asymmetrics, some with poles – and it looked like the well-sailed boats did well.”

Performance Racing Division 2 shared the inshore course with the Australian Sports Boat Association NSW Titles fleet. Results were subject to protest at the time of writing but showed the Fareast 28R leading from Bullwinkle, a Bull 900, and the Beneteau 34.7 Speedwell.

The Performance Cruising fleet looked spectacular as exited Port Stephens under spinnaker, rounded the offshore islands then headed to the mark off Fingal Bay’s white sandy spit. A westerly of around 12-14 knots hung in for their course, with no requirement to shorten.

The Marten 49 Indigo II won line-honours in Division 1 and finished third on PHS behind Brendon Gregg’s Quest 3 and Tempo.

Intiy, a Beneteau Figaro3 making its Australian racing debut, was fast out of the blocks after a kite start but needed more breeze to capitalise on its stabilising foils and asymmetric spinnaker. It was 17th across the line and 21st on handicap. 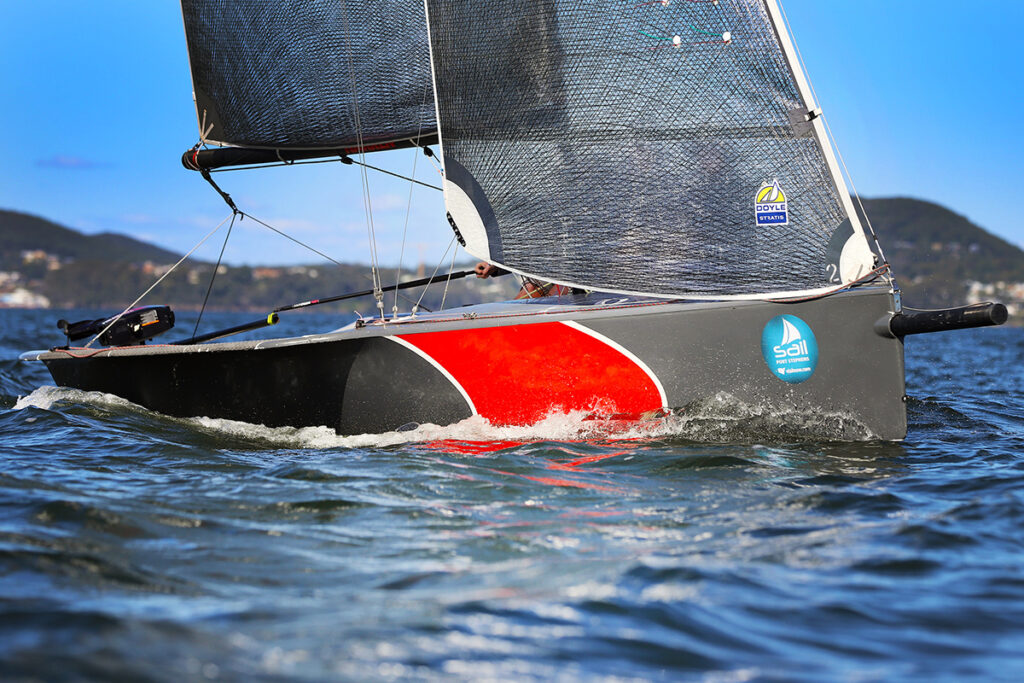 With three windward-leewards contested today, it was one-way traffic for The Stig in the Australian Sports Boat Association NSW Titles.

Steered by Malcolm Dean, the Shaw 650 showed its class in lighter airs with three runaway wins.

“The races got better and better as we went,” Dean said. “That said, we got lucky in race 2 because we all got mixed up with the Performance Racing Division 2 fleet. We were just in front at the time, which meant we missed out on the worst of it.

“There were times when it felt like the others were coming back at us when the wind lines came through but that’s always the way. Those sort of lighter conditions suit us.”

Despite the dominance of the performance, Re-Heat posted three seconds to sit just three points adrift, so The Stig can’t afford to take the foot off the accelerator tomorrow. Wild Huntress, an Elliott 7, holds third place.

Lighter winds are predicted for a day dubbed Super Saturday as, traditionally, the fleet heads seawards towards beautiful Broughton Island. Stay up-to-date with Sail Port Stephens news and results via the event website sailportstephens.com.au or facebook/sailportstephens/.