Port Stephens is preparing to host the best of Australia’s eastern seaboard keelboat racing this weekend when a record 150 crews, racing trailable sports boats to the latest generation TP52, aim to make their mark on the Pantaenius Yacht Insurance Port Stephens Trophy series.

The Bannisters Port Stephens Commodores Cup contested Monday to Wednesday opened in light winds followed by two days of great breeze for the record fleet. The second-half Port Stephens Trophy fleet is anticipating south-east winds below 10 knots for Friday April 12 and on Saturday April 13 plenty of sun and northerlies just 3 knots building to 8 by mid-afternoon. Sunday was looking dicey earlier today but is now shaping up as the best of the three-day series – 7 up to 12 knots of S – SSE breeze.

The influx of boats and sailors for the 12th annual regatta means boat berthing and accommodation are stretched to capacity and at night Nelson Bay’s pubs and restaurants are heaving. Big numbers pose another challenge for regatta director Denis Thompson and his experienced team of volunteer officials – grouping different fleets to maximise a fixed number of courses and a limited number of on-water personnel.

Division lists are available at http://www.topyacht.net.au/results/2019/sps/index.htm under Entrants in each division.

Three IRC divisions will race offshore to complete a schedule of five windward/leewards and one passage race, on Saturday April 13, for the Garmin NSW IRC Championship. The TP52s and remaining asymmetric boats will combine in division 1 with the seven TPs scored both under IRC and TPR handicaps, the latter a bespoke AMS based handicap which takes into account the number of professionals on board.

Peter Wrigley and Andy Kearnan’s KOA took out the TPR division of the recent SailFest Newcastle event and Marcus Blackmore’s Hooligan won that inaugural event on IRC handicap. Hooligan won Sail Port Stephens in 2018 and performed strongly under IRC at the Festival of Sails in January. 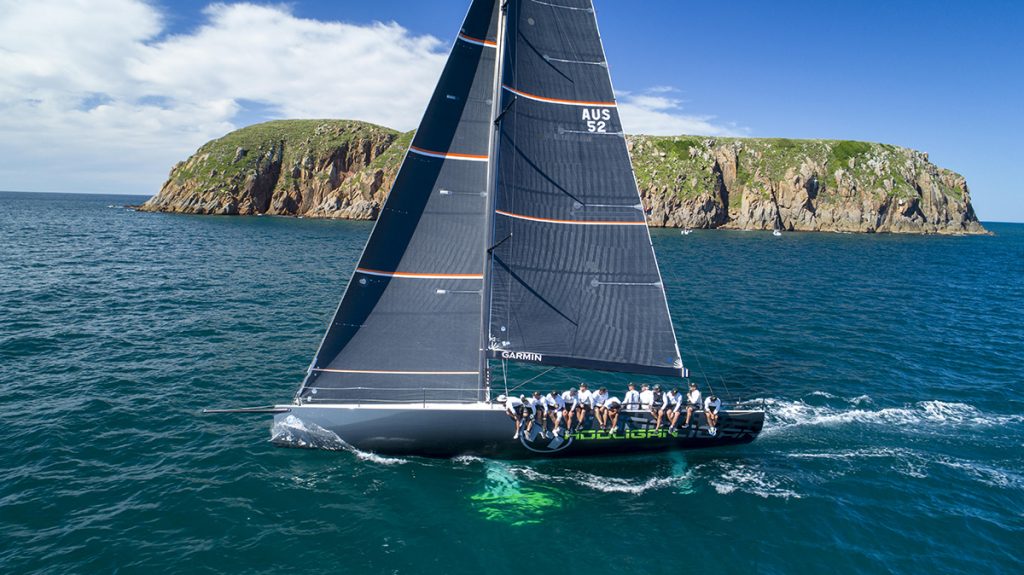 Performance Racing entrants will also complete windward/leewards and a Saturday passage race. Division 1 boats, including a number of Sydney 38s and the Sydney 47 Wots Next, will race on the Super 12 course.

Denis Thompson has made Performance Racing division 2 the third start on the sports boats and VX Ones inshore track. Starters includes the Bull 9000 Bullet and the Commodores Cup division 4 winning Fareast 28R, both well and truly warmed up from the first half of the week.

The Performance Cruising fleet is the largest to contest the Port Stephens Trophy, the bulk from the wide range of production boats, plus one-offs such as Mary Kelly’s beautiful Farr designed Virago II. Their series is three passage races starting from 1125hrs daily off the breakwater at Nelson Bay. 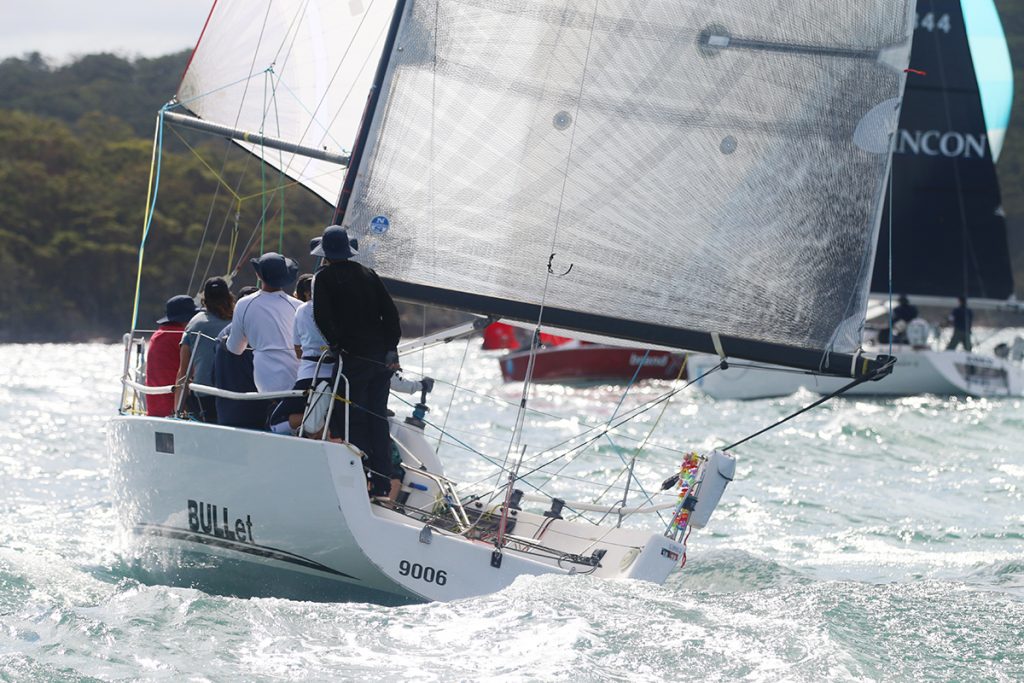 A solid New South Wales and Queensland 11-boat fleet will vie for the sports boat national title in what looks like a tricky forecast, particularly inshore.

Andrew York’s Reo 7.2 Reo Speedwagon is a multiple national champion but with the light air outlook, insiders say the top spot is wide open to the older sports boats.

Graham Sherring’s Leech 750 Retuned and Andrew Wiklund’s Egan 7 called Crank, both out of Queensland, should be on the money based on previous performances. X Evergreen, Brent Connor’s Elliott 7 is considered the underdog to watch.

Looking down the VX One entry list there are plenty of names there that can take out the state title, but with a pretty ordinary looking forecast and a lot of new crew/skipper combinations, this regatta will be harder to pick than a Melbourne Cup winner, says a class insider.

The big story at Sail Port Stephens is the reappearance of Ian Oatley’s RP42 called Q. The day racer hasn’t been seen on the water since an issue with the electronics controlling the radical canting keel system caused the boat to capsize in Sydney Harbour back in 2011. Then life and business got in the way for Oatley, and the all-carbon boat, which is still ahead of its time, sat shed-bound. Q has been relaunched for Sail Port Stephens 2019 and will be crewed by a team of six, including Ian and his son Dan. Video story to follow.

Super 12 spokesperson Mitch White says given the forecast one of the “Maccas”, the MC38s, could take out the series, or Little Nico might be in the hunt given Walters has made some changes to improve light-air performance. 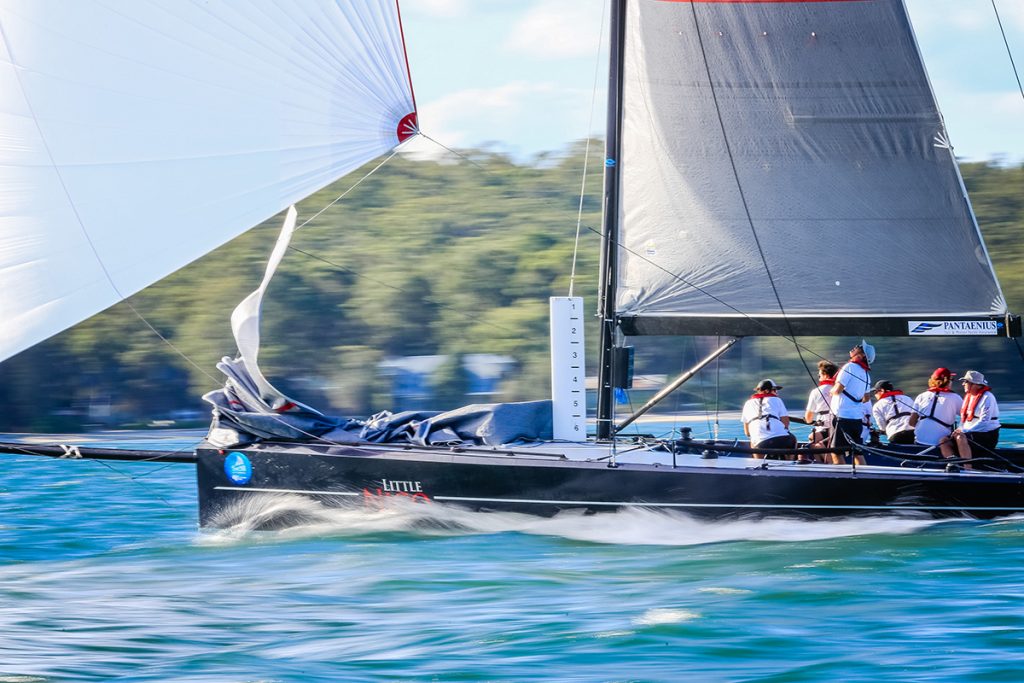