The best breeze of Sail Port Stephens’ second half closed out the pointscore for a record number of entries, triggered wild wipeouts and decided a brand new Australian Sports Boat Association champion and state champions in the VX One class, plus three IRC divisions. 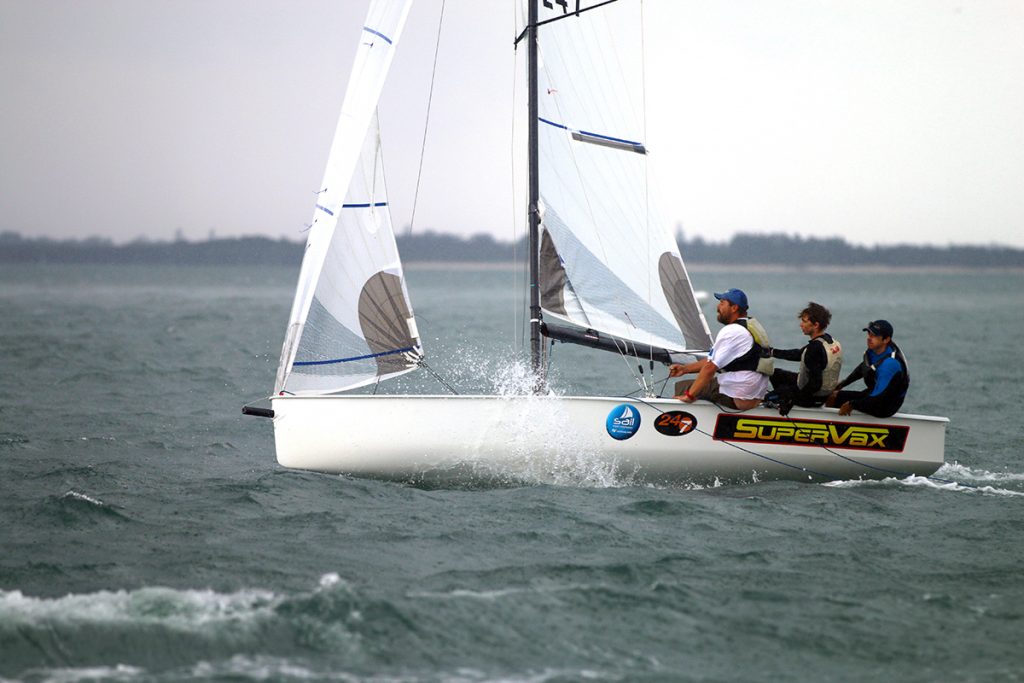 Move over Andrew York and Reo Speedwagon, Malcolm Dean and his Lake Macquarie crew on the Shaw 650 The Stig are the new Australian Sports Boat Association champions from a strong 11-boat fleet.

Though The Stig is a new purchase for Dean and his crew, they won a sports boat nationals racing Penguins on Parade around 2004. “We have sailed together a lot on other boats, and we were comfortable in the light airs. I don’t mind saying we were under-prepared as I haven’t had the boat that long,” Dean said after racing. “We are very happy with our result and it’s been great having everyone close together at our Soldiers Point camp.”

Previous multi-sports boat champion Andrew York and Reo Speedwagon finished second overall, 10 points off the frontrunners, and the spill of the day went to Jamie Berndt’s Shaw 650 Situation Normal which was flying downwind in a big breeze and finished up turtled with a broken keel.

Josh McDonald put together a crew which included multiple Australian VX One champion brothers Ben and Josh Franklin and the combination proved potent. Geelong’s Brian Case with Slick and Andrew Divola’s Bombola both went close to the Queenslanders on Supervax 24/7 but in the end Bombola trailed the VX One series winner by 10 points. Third was Peter McDonald’s Kerb.

“It was an awesome weekend, really close racing between the fleet,” said Ben Franklin who was driving Supervax 24/7. “We had good boat speed, especially upwind, and tried not to be too risky, and we’ve been working on our tactics. Today we had every season!” 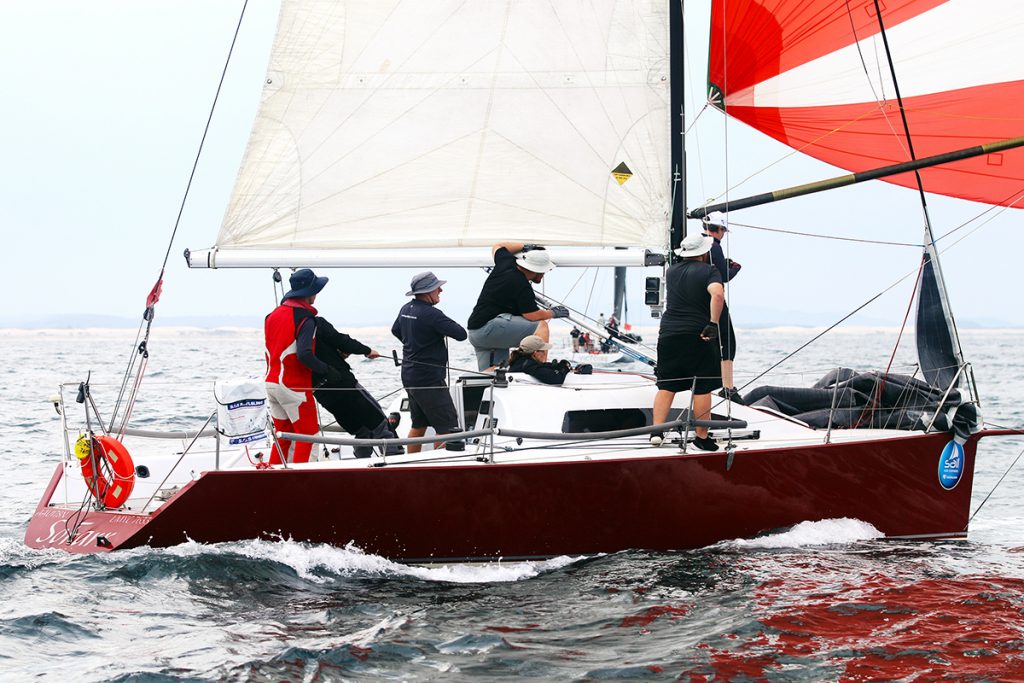 Gordon Ketelbey’s TP52 Zen, sailing for the Cruising Yacht Club of Australia, consolidated their day two IRC division 1 advantage on the final day of competition and cleaned up the shortened six-race series from Marcus Blackmore’s TP52 Hooligan by six points.

“Today was a lot better, more clean wind until the last race when we had a massive wind shift to the left,” Ketelbey said. “It was a mentally challenging series, super super light and tricky. The core crew are from my Farr 40 racing days plus whoever else comes along, and we are loving the bigger boat, especially when it lights up doing 20 knots.”

TPR top place, based on a modified AMS rule, in the mostly light-air series went to Sam Haynes’ Celestial with KOA, the TPR winner at the first event, SailFest, second.

IRC division 2 belonged to the Farr 40s, until the breeze came at 12 knots of WSW shifting to SW then east during the final windward/leeward. Bob Cox’s run of division 2 victories with his champion Middle Harbour DK46 Nine Dragons looked set to end at four-in-a-row when the Farr 40s were the cream that rose to the top in the light winds.

“Five in a row didn’t look like possible when the Farr 40s were beating up on us,” said Cox, adding, “we just had to stay in contact and when the wind came up ours became a real success story! I’m very happy – special thanks to Joe [de Kock] for putting up a great effort and to my guys who really pushed the boat in the heavier winds.”

IRC division 3’s latest state champion is the Lake Macquarie Farr 31 Sofarr, Dale Sharp’s five firsts and one third place unequalled among the challengers. “We only IRC rated the boat a couple of weeks ago so we are a little surprised. We were sailing with an 18 or 20 year-old mainsail and it did what it needed to do, we are all pretty chuffed.

“It’s a family affair, my wife Natalie is on the bow – to keep us separated so we don’t box on too much, we have a set of twins and another husband and wife. We came here for some great sailing whether we won or came last. I think we’ll be back for some more IRC sailing!”

Steve Barlow’s Lightspeed, with round-the-world yachtsman Chris Nicholson aboard, made a late charge to seal Performance Racing division 1 and Super 12s, the MC38 team from Sydney loving some additional pressure on Sunday April 14, 2019.

“We have some good guys on board in Troy Tindill and our tactician Seve Jarvin who is gold, and we made limited mistakes. Port Stephens is a fantastic place to sail and we had the whole gamut over the series, especially today with squalls of 18 knots when we were doing 18 knots of boat speed, which was a refreshing change.”

Three Performance Cruising divisions completed a third and final passage race between Corlette Point and Shoal Bay, those crews also copping a drenching but happy to be moving, at least until mid-afternoon when the breeze collapsed.

Mark Skelton’s Beneteau 40.7 Jab wears the division 2 crown for the next 12 months and division 3 narrowly went to Dave Griffin’s Alfresco after they broke a deadlock with Mortgage Choice Rumba. The crew of Rob Carr’s Northshore 370 from Middle Harbour Yacht Club also picked up the Port Stephens Trophy, selected by organisers for embodying the spirit of fun and for their participation.

The dates for Sail Port Stephens 2020 will be announced in the coming weeks and given both the Commodore’s Cup and Port Stephens Trophy drew record fleets this year, owners are encouraged to enter early to secure a marina berth, once entry opens.

Full results for all divisions racing at the 12th Sail Port Stephens proudly supported by Destination NSW and Port Stephens Council are available at http://www.topyacht.net.au/results/2019/sps/index.htm 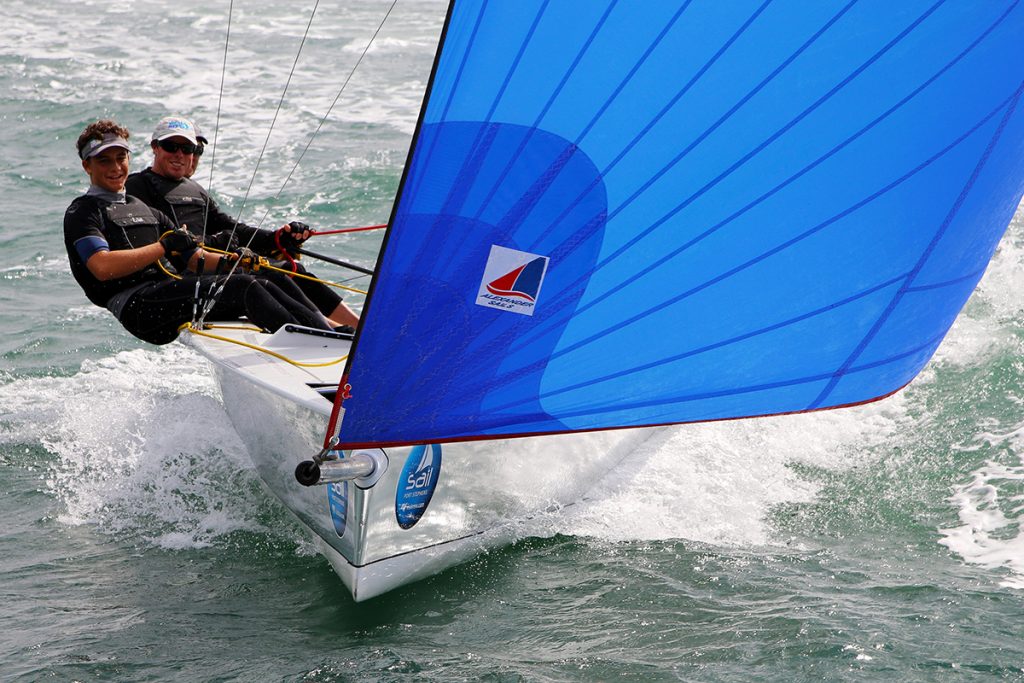